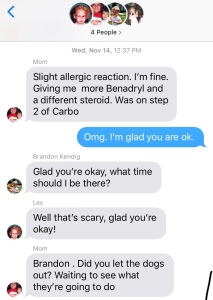 We all knew hypersensivity to carboplatin was a possibility. After 6 cycles of carboplatin they administer it to you over the course of 3 hours instead of 30 minutes so they can 1. try to prevent a reaction and 2. stop it as quickly as possible if you develop a reaction. Prior to this cycle mom had received 12 cycles of carboplatin. Every time she received it we anxiously awaited the news of whether or not her body was still tolerating it. Well on November 14, 2018 (her first chemo cycle since June 2017). Her body decided it was no longer a fan of Carbo. She developed a rash on her left hand and her throat felt scratchy. They stopped the drug immediately and gave her Benadryl and steroids to combat the reaction. So just like that the drug we had trusted to abolish her cancer like it did before was no longer an option.

After speaking with her doctor they have decided her new cocktail of choice would be Oxaliplatin with Gemzar. The biggest side effect with the oxaliplatin is cold neuropathy. It’s an extreme sensitivity to the cold which can last 5-7 days. The cold will cause numbness because her nerves can stop functioning properly when exposed to the cold. It also can effect her breathing if she is exposed to cold air or even a cold drink. She will have to take precautions in order to prevent the neuropathy like wearing gloves if she gets something out of the refrigerator.

This new cocktail begins tomorrow (December 11). I’d be lying if I said it didn’t make me nervous. Anytime she starts a new treatment it’s scary because you just don’t know how it will effect her.